At the end of the sixteenth century and into the early seventeenth century, Augsburg became known as the manufacturing center for elaborate brass-cased German clocks that took on the shape of a cathedral. Not only was the case elaborate in design but the clock mechanism drove a multitude of dials showing, for example, the phase of the moon, the day of the month, the position of the sun and moon in the zodiac, as well as the position of certain stars. This type of clock was revived in the late 1800’s by Haas and Company and sold very well.

Augsburg also became the center for production of early novelty clocks and automata due to the development of advanced gearing and the proper calculation of gear ratios. A favorite form of automation was an animal statue, such as a lion, dog or elephant, with blinking eyes. Other automaton clocks moved across the table on the hour; one example is a clock case in the form of a coach and horses and another is a ship on wheels 'sailing' along the table. These elegant pieces of mechanical prowess could be two feet in length and were meant not to just tell time but to entertain and dazzle dinner guests of royalty and the wealthy seated at a huge long table.

During the Renaissance period, the Church exerted a tremendous influence and another popular form of antique German clocks made in the Augsburg area was the monstrance clock, also called a mirror clock. The monstrance is a cross-shaped gold or silver vessel where the sacred host of unleavened bread representing the Body of Christ is placed in the center of the cross for adoration by the congregation. Elaborate monstrance clocks would contain sacred human figures as part of the design. While we would expect to see a clock dial in the middle of the cross these clocks did not have a dial but used a rotating ball located at the top or in the base as the mechanism for indicating the time of day. The monstrance clock and crucifix clocks remained popular until the eighteenth century.

Another finely crafted clock that came from what is now Germany and Austria is the Vienna Regulator , an elegant antique wall clock made from fine woods and with a precise and complex mechanism made from around 1790 to 1910. 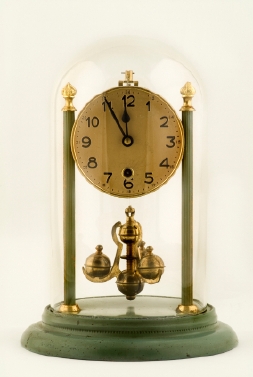 The original 400-day clocks, also called an anniversary clock , were first made in Germany sometime around the middle of the nineteenth century. A 400-day clock is based upon a torsion pendulum, one that rotates slowly first in one direction and then the other. Due to its slow speed of oscillation, the torsion pendulum of a 400-day clock will run for over a year on a single winding; hence the name anniversary clock because it needs to be wound just once a year on the “anniversary” of the date it was received. American GI’s frequently gave these imported German clocks as wedding gifts in the late 1940’s and early 1950’s. Although there are millions of these clocks around the world, not many people have the patience needed to keep these sensitive and delicate clocks working.

The Black Forest area is located in southern Germany and was the origin of hand-carved wooden clocks beginning in the late 1600’s. Not only were the cases and dial made of wood, the clock mechanism was wooden as well. Sometimes these antique German clocks are called Dutch clocks but the correct name for them is Deutsche. These early wooden clocks utilized a verge and foliot escapement comprised of a wooden wheel with wooden pins parallel to the edge as the crown wheel.

The pendulum became part of these wooden clocks sometime around the middle of the eighteenth century. At first the pendulum was positioned in front of the dial. Shortly thereafter, brass was used as part of the clock mechanism, especially a brass escape wheel, and the pendulum was moved to the back of the clock. These early Black Forest clocks usually hung on the wall with the weights hanging below by chains.

Around 1740 Franz Ketterer made the first cuckoo clock , which maintains a characteristic shape and the cuckoo bird that emerges from its house to announce the hour. Believe it or not, there is a European species of bird called the cuckoo which has a call replicated by the bellows inside the cuckoo clock. After 1850, cuckoo clock makers added automata to their signature Black Forest clocks like carved human figures that would emerge from a chalet to strike the hour with a hammer or revolve like music box figurines. While there are many antique German cuckoo clocks still in existence, these German clocks continue to be produced by the thousands in the Black Forest region of Germany.

The discussion of German clocks would not be complete without mentioning one of the biggest success stories of the 20th century, The Hermle Clock Company . Started in 1922 by a clockmaker named Franz Hermle, this company is still to this day one of the largest clock and clock movement company in the world.