The earliest mechanical clocks made in the 1300’s were large and cumbersome timekeeping devices. By the late 1500’s in Europe, royal houses employed court clockmakers to fashion elaborate clocks for their great palaces. Clock technology had improved sufficiently that table clocks became popular, where the clock was placed on a sturdy table both for support and to showcase the fine artwork.

While these clocks did not keep good time, the table clocks that were made for royalty at the end of the sixteenth century were impressive works of art that took center stage on a large table. These clocks were frequently made from brass and featured great embellishments and detailing. Besides keeping time automaton clocks included complex mechanisms for striking bells and musical chimes as well as moving figurines.

The First Shelf Clocks in England

Meanwhile, English clockmakers were lagging behind their continental counterparts in technology. However, in the early 1600’s the lantern clock was the standard table clock in England. 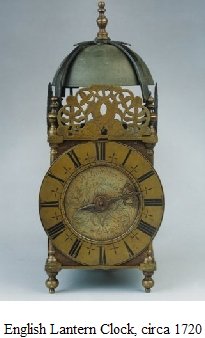 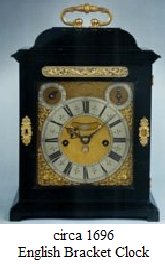 But, like the continued miniaturization that we see today, clocks became smaller and portable due to great advances in clockmaking technology during the 1600’s. These significant breakthroughs include:

1. The pendulum was applied to clocks in 1657. 2. The anchor escapement was developed in 1671. 3. The invention of the rack and snail striking method in 1676 advanced the technology of repeating clocks. The style in table clocks remained approximately the same throughout the 1700’s in England with lantern and bracket clocks continuing to be the norm. About the only deviations in style were variations in the dials and some models were made with a rounded instead of a flat top.

The earliest American shelf clocks were cumbersome devices, especially the ogee clocks with their large weights. However, once spring driven clocks were manufactured in the United States, the major American clock companies turned out mantel clocks by the tens of thousands for the domestic market as well as for export to numerous countries around the world. 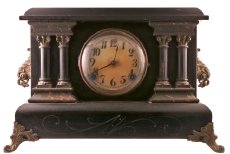 While there were lots of other styles of shelf clocks, a staple of American production from the 1850’s to the 1920’s was the black mantel. They typically had a size of about 12 inches high, 16 inches wide and 7 inches deep. Many of the clock cases were made of wood and painted with the glossy black enamel paint according a process invented and patented by Edward Ingraham. The dial was centered in the clock case and most black mantel clocks had two key wind openings, one for the time and one for strike.

Stylistically, many black mantels had one or more celluloid columns on both sides of the dial. The top of the case was either flat or curved. Many of these mantel clocks stood on cast pot metal feet that were coated with brass colored finish. Frequently these clocks also had painted gilt filigree decoration on the front of the case. There are literally hundreds of variations on the black mantel clock as produced by the major American clock companies.

If you are a novice clock collector or are just becoming interested in American clocks and their history , you can’t go wrong with acquiring a black mantel as one of your first clocks. It is easy to find one in good condition for a fair price. Should the mechanism not be in perfect running order, a reputable clock repair shop can fix or replace the works with ease.

One of the best methods for finding just the right clock is to check out eBay. They have thousands of clocks displayed at any one time; many more than you could find in stores. It's easy to register if you haven't already.

Take a look at the current listings. (You can also use the search box if you're interested in something other than what is listed.) Do you have a favorite clock you would like to show off? Or, maybe you have a question about a clock you own. If so, check out our Clock Forum. Read Clock Collecting Tips- Back Issues Back to Discover Clocks Homepage