The Biedermeier style of Vienna clock appeared around 1840 and was the predominant style until around 1870. These Vienna clocks were fancier than the previous Empire style and featured rounded corners and curved tops with crests. The dials shifted some in style as well, to what is called a pie crust bezel, as shown above.

Later Vienna clocks are classified under the Altduetsch style. Vienna clocks with the Serpentine, Baroque and Art Deco styles were prevalent until Vienna clocks lost popularity around 1910. These later clocks featured graceful lines and most likely had a fancy case that included a carved crest, ornate columns, plus finials and possibly an embossed pendulum. Around the turn of the century, American clock companies , such as Seth Thomas and New Haven were also producing their versions of Vienna style regulators. Most of these American clocks had a rounded top that made the clock look more like a schoolhouse clock with a smaller top and longer drop area. There were a few models, such as the Seth Thomas Regulator #10 that looked like their European cousins.

No matter what style period a Vienna regulator represents, it is a wonderful example of fine craftsmanship in both the clock works and the artistry of the clock case. Any of these clocks, European or American, make excellent additions to your home. Most of them have been ticking away for over a century, and will probably still be ticking a hundred years from now. 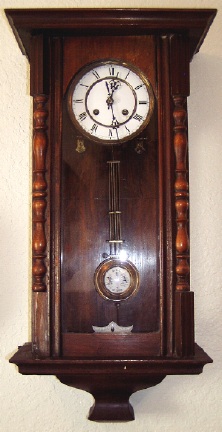 Back to Clock History