These early mechanical clocks are some of the first devices to directly replicate human effort with a machine. This explains why many of the old European town clocks feature a carved man, called the clock jack, who comes out of his house and strikes the clock bell. This once was a real job, being the town bell ringer. One ledger record dated 1286 indicates that the bell ringer at St. Paul’s cathedral in London was given a loaf of bread every day. But a rural English town’s records dating from 1410 indicated that the town council was unhappy with their bell ringer and voted to order a town clock that didn’t need a human operator.

The oldest known mechanical clock of this era can be found in Salisbury Cathedral in England, which was made in 1386 to strike the hour on the church bell. It wasn’t until the 1930’s that anyone realized the age and importance of this ancient timepiece. In 1956 it was restored to its original design using reproductions of the verge and foliot escapement to replace the pendulum that was added in later centuries.

Another similar early mechanical clock is located in the church in Wells, England which features a wooden clock jack who strikes the hour with a hammer and the quarter hour with his heels. The Wells clock also displays fighting knights on the hour. It is likely that these clocks were built at the request of Bishop Erghum who was bishop at Salisbury from 1375 to 1388 and bishop at Wells from 1388 until 1400. 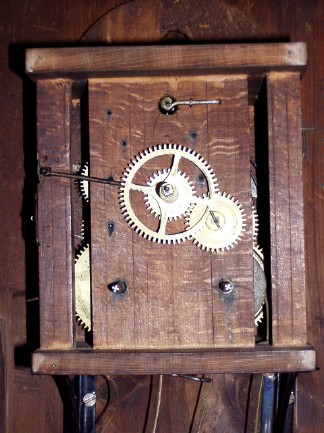 The crown-verge escapement features the foliot which is a pivoting beam (lever arm) with a moveable weight at each end. As this weighted beam oscillates, it drives a series of gear wheels at a relatively constant rate. The last gear is called the crown wheel because its shape resembles a crown. The pointed tips of the crown wheel are blocked and released by pallets on the gear axle which are called the verge. These blocking and releasing functions of the verge control the oscillations of the lever arm or foliot. The crown gear is also called the escape wheel because this gear allows the rotating motion of the gear train to click over or escape one tooth at a time.

The length of the foliot and the position of the moveable weights on the foliot combine to control the rate at which teeth on the crown wheel escape and regulate the length of time before the bells strike again. While these early mechanical clocks were not particularly accurate and required constant maintenance, they did introduce uniformity to life for townspeople throughout Europe.

You can obtain early mechanical clocks on Ebay. They always have a large collection available. New to eBay? It's easy to register and only takes a few minutes.

Back to clock history.