Most of the above clocks styles were made by many clock companies, in many countries. The styles are familiar to most of us. There are many other styles that are not as well-known, nor are they as easy to find as the ones mentioned above. Because of this, they usually command a higher price when sold. Some of these are figure 8 clocks, advertising wall clocks, ship's bell clock, wag-on-the- wall clock, English tavern and hooded clock, Zaandam and Morbier clocks to name a few.

Added to these antique clocks , there are hundreds of styles of newer quartz clocks. There are very few homes today that don't have wall clocks hanging in their home. 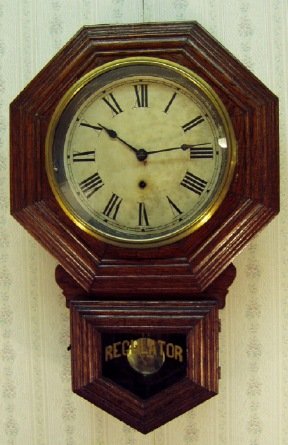 Didn't find what you're looking for?

You may find the next clock to put on your wall here: 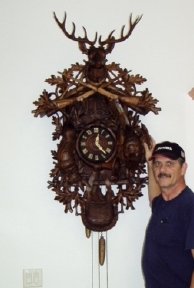 Here is a picture of me and a very large hand-carved cuckoo clock I restored for a friend of mine. I'm not sure of the exact date the clock was made, but it was before WW1 according to the owner's grandfather.

Back to Discover Clocks Homepage

Do you have a favorite clock you would like to show off? Or, maybe you have a question about a clock you own. If so, check out our Clock Forum.