Remember that in the 1500’s clockmaking was still a relatively new endeavor. The earliest clocks were cumbersome devices that were frequently made by blacksmiths who had the technology for forging components for a clock. But it’s a long way from clumsy iron pieces to the intricate springs, wheels and levers needed for a miniature clock that was portable. While many early clockmakers arose from the ranks of blacksmiths, the watchmakers came from the guilds of locksmiths, goldsmiths and jewelers.

Over time making watches evolved into a skilled trade. Master watchmakers were able to fabricate a complete watch without any assistance. They developed the skills needed to file, saw and fabricate watch parts out of brass and steel that were only millimeters in size completely by hand.

Watchmakers and clockmakers eventually joined together in the clockmaking guild, differentiated only by the size of the product they worked on. During the sixteenth and seventeenth centuries, guilds dominated European clock and watch making. Guilds served to maintain high quality and a system of teaching the trade to apprentices; but at the same time the domination of the watchmakers by the guilds stifled innovation and competition. By the early 1600’s the role of the guilds declined. 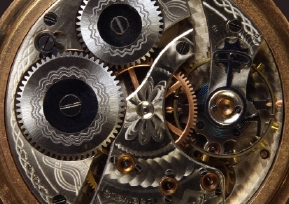 Around the same period as the decline in the power of the guilds came an increased demand for watches in Europe. Watch production became an early assembly line business. Families specialized in the fabrication of watch components like springs, balance wheels, and plates in cottage industry shops. Watch mechanics fine tuned these components into finished watches. Switzerland became the leading center for watches with a large number of cottage shops producing watch components during the early 1700’s. Watchmaking also became an important industry in major cities throughout Europe including London, Nuremburg and Paris.

The era of handcrafted watches lasted for 300 years, from the 1500’s through the 1800’s. From the late 1800’s onward, the watch industry was chiefly conducted in a factory environment with assembly line methods to meet the common demand for personal timepieces.

The Impact of Electronic Watches

The manufacturing of traditional gear driven clocks and watches suffered serious decline when electronic timepieces were introduced into the marketplace in the 1960’s. These cheaper and easier to use watches which did not require periodic winding became the watch of choice for millions of working people. The watch was a necessity item and the throwaway society in general preferred not to take care of an expensive watch for daily use.

The same disposable aspect that makes modern watches so popular fueled the resurgence of interest in fine mechanical watches during the late 1980’s. Status conscious individuals saw the more expensive and delicate mechanical watch as a symbol of prosperity. Today name brand watches are a status symbol.

The role of the watchmaker in society has come full circle over the span of 500 years of watchmaking. The wealthy again perceive the value in owning a hand-made precision watch with a mechanical movement.