Father-in-law's clock that was his grandmother's 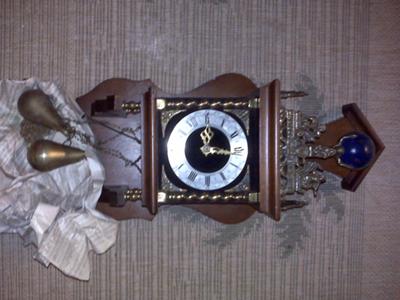 My father in law is 70 years old, and he acquired this clock when his grandmother died at over 80 years of age, but we would like to know it's history and value, as we can only tell that it was made in Holland, and it was still working three years ago when they moved, and it was boxed up.

It has the markings on the front "NU ELCK SYN SIN" on the upper brass portion, and on the actual face of the clock, reads "made in Holland".

Note from Bill: Hi Jeff, your Dutch wall clock is called a Zaandam clock. They are made in either 8-day models or 30-hour models. From what I can tell from your picture, yours looks like a 30-hour clock - means you have to wind it daily.

As far as the age of your clock, I can't really tell without seeing it closely. They have been made for many years, and are still made today. Thanks for posting, Bill