The company finally seemed to have put all its troubles behind and was glad to be stable once again. However, during the years the plant was idle, many of their customers were buying their clocks elsewhere. Once again, in 1898, the company had to borrow money to stay in operation.

Another serious setback happened on March 17, 1899, when a fire that started in the lacquer room of the movement factory destroyed that building and several other buildings around it. Even though much of this loss was not covered by insurance, a new building was quickly built and occupied by October of that year. While waiting for this building, the William L. Gilbert Clock Company was contracted to make movements.

With The Sessions Clock Company back up and running, it may have been possible to regain a viable status but, two months later on December 14, 1899, the case factory was totally destroyed by fire. A modern brick case factory was built and occupied by April, 1900. The money borrowed for this building added to an already critical financial situation.

James Welch died in January of 1902 and later that year, William E. Sessions was elected president of the company and Albert L. Sessions became treasurer. They borrowed money to get the firm back on it’s feet and bought up Welch stock until they were able to take over on January 9, 1903. The new corporate name was ’The Sessions Clock Company’.

The Sessions Clock Company in the Twentieth Century

In the early 1900’s after the Sessions family controlled almost all the stock in the company, they still manufactured the same E.N. Welch line of clocks. You can date early Sessions clocks by the label; if it reads E.N. Welch it was made before 1903; if both E.N. Welch and Sessions Clock Company appears on the label it was made after 1903. The Welch name was gradually phased out as Sessions started making their own line of clocks, and by 1920, they started making higher quality clocks such as regulators, and started phasing out the old style pressed-oak kitchen clocks and black mantel clocks. Trouble arrived again for the Sessions Clock Company in the 1930’s. Of course the depression slowed sales tremendously, but in addition to the economic slow down was the popularity of the ‘new’ synchronous electric clocks that left Sessions with a large inventory of their spring-driven clocks. By 1936, Sessions discontinued the manufacture of spring-driven clocks, and made electric clocks exclusively.

Heading into the 1950’s, The Sessions Clock Company was again turning a profit by selling cheaply made electric clocks. Most of these were plain looking, plastic alarm clocks, or kitchen wall clocks. The one exception to this lack of innovation was their ’worlds first (and last) family planning clock’ called “The Lady“. It could be set with a woman’s menstrual cycle and show the days of the most or least fertility. The Lady never caught on with the public, so it was discontinued. It was re-introduced years later in the late sixties when it was thought that the public opinion on birth control had changed but it again failed to capture the public’s interest. However, today they are highly collectible if you are lucky enough to find one.

In 1956, the name of the Sessions Clock Company was changed to The Sessions Company. Sales were declining and by 1958, the company posted a loss of more than a million dollars. In 1958, the company was sold to Consolidated Electronics Industries Corporation of New York. They continued to make cheap electric clocks in the Forestville, Connecticut plant. In 1968, as a result of a nine week strike by its workers, the company was sold to United Metal Goods Company of Brooklyn, New York. The new company shut down the Forestville plant, after over 137 years of continuous operation, and sold off the buildings. The North American Phillips Corporation (Norelco) of Wilmington, Delaware merged with what was left of Sessions in 1969. They were going to manufacture electric control devices and they changed the name to The Session Company. The new company didn’t get sufficient orders and never got off the ground.

The Sessions family did not completely disappear from clock making. W. Kenneth Sessions, Jr., a former board member of The Sessions Company, read the writing on the wall and left the company to form a new firm. The New England Clock Company started production in 1958, in Bristol, Connecticut. With the costs of manufacturing and wages spiraling upwards, Kenneth Sessions built this new business as an assembly and sales business, buying the movements overseas where they could be manufactured at a lower cost. The remainder of the clock parts, such as the dials, hands, cases, and chimes were made to order at other existing plants and brought to Bristol for assembly.

You can easily start a collection of Session Clocks today on Ebay. This is my favorite way of buying antique clocks. Check out what's available now in the box below. (If you want something else, you can use the search box below.) 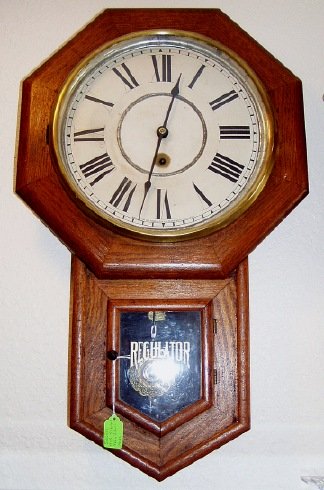 Back to Clock Companies