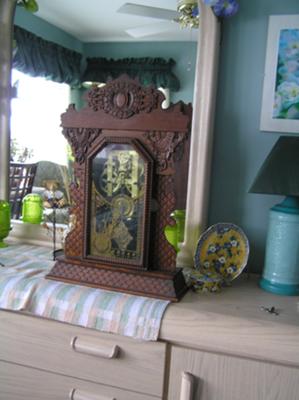 I have an old Sessions, what I think is called a "Gingerbread" clock. It will run for 3 or 4 hours and then stop. Once the pendulum is started the clock will run again a while and again it stops.

This clock has been in my family for many many years and spent a considerable time sitting and not running. Actually he (thats what I call the clock "Gramps") just flat refused to run.
I had him in an antique clock shop for service - took the repair man almost 4 months - once home the clock ran well for a year or two. Then it stopped and just wouldnt run. Inheriting my fathers gift of patence, I was able to get the clock running again. It has run well for several years now and then recently it has started acting up again. He runs for a while and stops. I start him and he runs a while then stops. I am sending a picture of the grumpy old sort in its current state as I have taken him apart again to see what might be the problem. Your help and advice would be greatly appreciated.