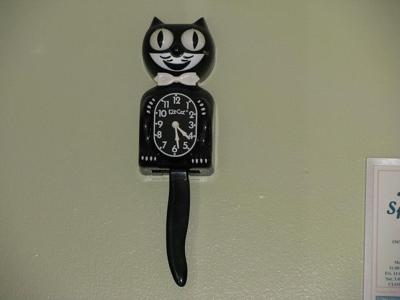 When I was a child, I fell in love with the Kit-Cat Klock that my grandmother had. It was broken but she kept it up on her wall anyway, because she just liked how it looked. After becoming an adult, I looked for one of those clocks for years to no avail. Then, one day, while shopping for holiday gifts at the Easton Town Center in Columbus Ohio, I found one! I could NOT believe it! And I purchased it right away from Restoration Hardware, a store that specializes in reproductions and old-fashioned items.

My Kit-Cat Klock is a reproduction of the original series from the 1930's. Per Wikipedia "The first clock was made in 1932 by the California Clock Company in Portland, Oregon." I know that they come in different colors and styles (such as female clocks in pink and white with rhinestones), but the classic black and white is my favorite and the one that my grandmother had, so it was the one I wanted. I paid over $40.00 for my clock, but it is worth every penny (even if it is made out of holly plastic!). It adds character to my kitchen just as it did my grandmother's kitchen, and every time I look at it I think of her. I love the way his eyes and tail swing to the second hand and his little white bow-tie. He also sports a wide-eyed smiling face that just makes everyone smile. Everyone that sees him wants to know where I got him and tells me stories of when they were kids and saw their first Kit-Cat Klock. Its a great conversation piece and I hope to have it for many more years.