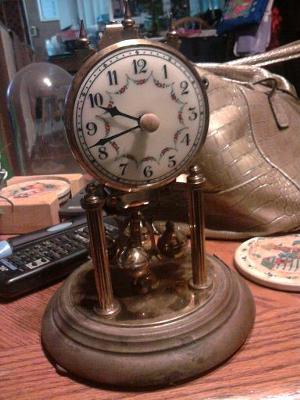 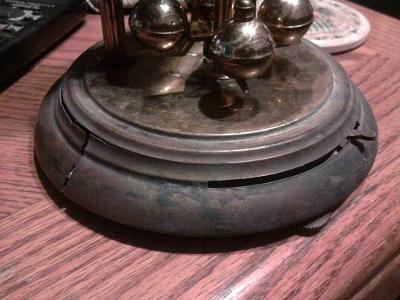 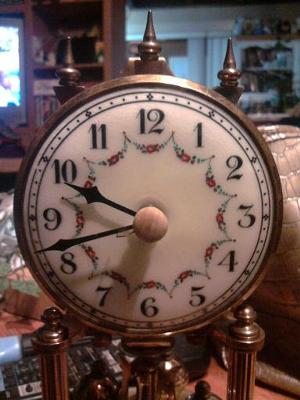 It was extensively corroded, and I began restoration. All but the base has been cleaned and polished, it's cracked so I left it alone. The retaining screw for the hour and minute hands was broken off the corroded drive shaft (whatever the actual name for it is???) so I crafted a wooden replacement with a bent pin to drive the minute hand. I replaced the suspension spring, calibrated and adjusted the suspension spring, it's adjusted close enough to be accurate to about half an hour a month.

It is 8.5" inches tall. A miniature anniversary clock It says "Hall Craft Corp" sideways on the right - "no(0) jewels unadjusted" "Made in Germany" on left side of suspension spring.

It's missing one adjustable foot, substituted a machine screw....

An odd story surrounding this clock is---

This was found in a cardboard box alongside an actual human skull! The Nolan County Sheriffs department and Texas Rangers investigated the happenings on how a persons head ended up in a box in a barn (people don't randomly lose their heads literally every day, you know?)

The property the barn sat on belonged to a vet in Cleburne, TX up until he died in the mid 1970's. The house was torn down, but the barn he stored his "treasures" in was just left to rot.

He had a fascination with Native Americans, during the 40's, 50's, and 60's he traveled New Mexico, Arizona, Texas, and other western states collecting artifacts such as pottery shards, arrow heads, and at one point had found a burial site-- from which he took the skull.

The end result was a bunch of frustrated overweight sheriffs (one of which actually fell through the rotting barn floor) and the skull being presented back to the Indian Nation.

It's the centerpiece to a terrific story to tell the kids one night!