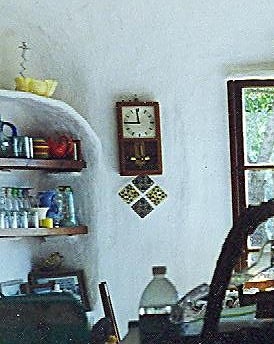 My Step-son's maternal grandfather removed this clock from a train station in Germany as a "fortune of war" following WWII. It hung in his home until his death, at which time it was given to my step-son. He treasured that clock as it was the only thing left to him by his cherished grandfather.

It burned up in the Santa Barbara Tea Fire 11/13/08, and I would dearly love to find one just like it to replace it as his house is nearly finished being rebuilt.

The clock was originally powered by a battery that had been out of production for many years. Kevin was able to rig something else (he's kind of a whiz at this sort of thing)to replace the original battery. The pendulum may have been some sort of two piece magnetic set-up.

Unfortunately, this is the only photo we have of the clock.

Is there any possibility someone has knowledge of this type of clock? We would appreciate any help we can get.