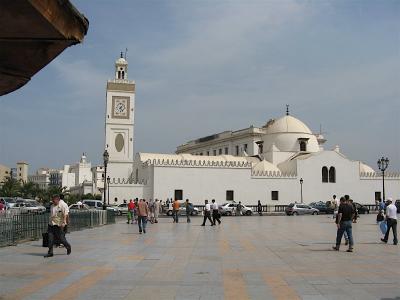 This clock is situated in Algiers, Algeria. The fact that it's on a minaret of a mosque, makes it totally unique.

It's situated on the minaret of Djamaa el Kebir mosque, in Algiers downtown. It's the oldest mosque of the town. It was built in the begining of the 11th century, by Youssef Ibn Tachfin, the first king of the Almoravids. The Almoravids were a brilliant dynasty who spread over a wide area of North-Western Africa and the Iberian peninsula.

At the beggining of the french colonization in Algeria, many places nearby the mosque were destroyed by general Bugeaud's troops, but the mosque. When Napoleon III came to Algiers for the first time, he ordered the reconstruction these places, and he was so impressed by the beauty of Djamaa el Kebir that he ordered to add some modifications to it. And that's why, nowadays there's a clock on Djamaa El Kebir!