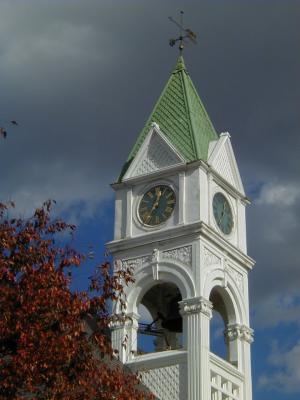 My favorite clock is a 1888 Seth Thomas Tower clock. It is the main clock mechanism for the town clock in Bordentown City, New Jersey, US.

The clock and tower were erected to commemorate the establishment of standard time zones in the USA. Bordentown City, New Jersey was the home of the Camden and Amboy Railroad. The railroad is the first passenger (and freight) railroad in the United States. It was home to the famous "John Bull" engine, now in the Smithsonian Institution in Washington, DC. The railroad company was established by the Stevens family (also founders of Steven Institute of Technology) as a land link between their steam ship line in Amboy, New Jersey (across the Hudson River from New York City) and the ports of Camden, New Jersey and Philadelphia, Pennsylvania.

Up to the 1800's each community had its own "local time", usually based on local apparent solar noon. When the railroads arrived people were able to travel faster than the sun and railroads needed some way to standardize the local time. This clock commemorates one of Bordentown's own for his work in establishing standard time in the US.

The reason this is my favorite clock is that it sounds each hour of the day. The ringing of the bell is a great way to establish a rhythm to my day and instantly connects me to a different era.

You can view the beautiful mechanism of this clock HERE.

Editors note:  That is a beautiful example of a Seth Thomas tower clock
and you seem very knowledgeable about it. I have a special interest in that particular company because I collect Seth Thomas clocks myself. The irony of it is, I was born and raised in Mount Holly, N.J. and drove through Bordentown hundreds of times when I was young and never knew that clock existed. I just returned from visiting family there in October of 2007. I would have definitely visited it if I had known of its existence at that time. Thanks for sharing this story. There is a history of
The Seth Thomas Clock Company here.